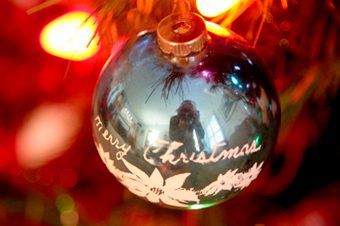 Low-light Photography for the Holidays

The holidays are here! Lights twinkle, candles cast a warm glow, and fireplaces illuminate the room, creating a beautiful, festive atmosphere. Most people try to capture this mood in a photograph, but often end up with underexposed, overexposed, or blurry images that don’t reflect the feeling of the moment. Low-light photography can be a challenge, but with a few simple tips you’ll be on your way to successfully capturing those holiday memories that you and your family will treasure forever.

If you’ve ever tried to capture a picture of an ornament or other holiday decoration in low-light, you may have experienced a few problems. Following are a few examples:

I shot this photo using the Auto Flash mode and Auto ISO. You can see how the flash caused a distracting reflection and overexposed the image.

I shot this second photo with the Flash Off and the ISO set to 200. I’m hand holding the camera and the image turned out blurry.

The final image was shot with the Flash Off using an ISO of 1600, and I’m still hand holding the camera. By setting the camera’s ISO to a higher number, I’m letting more light into the camera which allows for a faster shutter speed and results in a sharper image. Keep in mind, when you raise your ISO you introduce noise into your image (similar to film grain). This translates to tiny, discolored pixels in the dark areas of your image. Typically, dSLR camera sensors are better at handling higher ISO speeds, but now even compact camera sensors are producing less noise at higher speeds. Personally, I’d rather deal with a little “noise” than have a blurry shot. Experiment and see how your camera responds.

Your camera’s flash reaches approximately 10 feet so it won’t illuminate anything past that distance. When shooting a landscape in low light, turn off your flash, steady your camera on a tripod or solid surface to prevent blur, and take advantage of your camera’s two-second self timer to prevent any accidental camera movement.

Every December our local pier dresses up for the holidays. I try to capture a different angle and lighting condition each time I venture out to document this tradition, and I always take a lot of pictures. As the light changes, I adjust my camera settings. Some of the images from this session were very dark, others were lighter, I thought this one was just right.

Here’s the deal – it’s dark outside and your subject is standing in front of some very festive lights. You’d like to capture the glow, yet still light up your subject. Poof! You take a picture and your flash goes off. The resulting image shows a well lit subject, but the lights look….washed out. What happened?

The Auto Flash works well in some situations, this is not one of them. Notice that my subject is illuminated, but the background lights look dim.

Most compact cameras and entry level dSLRs have a Night Portrait or Night Scene setting denoted by an icon on the Mode Dial or in the Menu settings. If you don’t have this option, look for Slow Synchro in your Menu settings. Night Scene, Night Portrait, and Slow Synchro use a slower shutter speed that captures the ambient light in your scene, while the flash still illuminates your subject. Since the shutter speed is slower, you may need to use a tripod or rest your camera on a stable surface to reduce image blur. Or you can use the blur as a creative element in your image. Try it, and see what happens.

This family photo was taken using a slow shutter speed (1/30) and flash. This setting allowed me to capture the glow of the tree lights and the flash cast a nice, even light on everyone’s face.

I hope these low-light photo tips inspire you to capture and remember the important people, places, and things that make your holiday special.